A nationwide study, funded by the National Institute for Health Research (NIHR), assessing a less invasive procedure that addresses a common heart problem has shown that it is just as effective as surgery.

Transcatheter Aortic Valve Implantation (TAVI) is used to treat patients with severe aortic stenosis, a narrowing of the aortic valve. In this procedure, a new valve is threaded through a small tube inserted into an artery in the groin, upper arm or chest. It provides an alternative to open-heart surgery but until now it has not been clear how patient outcomes compare between the two treatments.

The UK’s first TAVI operation took place at Glenfield Hospital in Leicester in January 2007 and the technique is now widely used in patients who are at higher risk or unsuitable for surgery. Previous trials in various patient groups have shown outcomes after TAVI to be as good as those achieved after surgery but they have mostly been limited to highly experienced clinical centres that perform a large number of procedures, or have focused on the use of specific types of replacement valve. 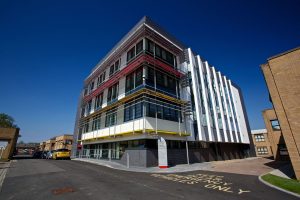 The £3 million study, the UK TAVI Trial, was led by Professor William Toff, Professor of Cardiology in the University of Leicester’s Department of Cardiovascular Sciences and the NIHR Leicester Biomedical Research Centre. The randomised controlled trial enrolled 913 patients, who were treated at 34 hospitals (including all in the UK that perform the TAVI procedure) between 2014 and 2018. Half of the patient population was randomly assigned to receive TAVI and half to receive surgery. The enrolled patients were all aged 70 years or older with some additional risk factors although for those aged 80 years or older, age alone was considered to confer sufficient risk.

The results show that, one year after surgery, the rates of death from any cause and other important clinical outcomes such as stroke were similar between the TAVI group and the surgery group. There was a greater improvement in symptoms, functional capacity and quality of life at 6 weeks in the patients who received TAVI although the improvement was similar between the two groups at one year.

The TAVI group had a lower rate of major bleeding complications and spent less time in hospital after the procedure and less time in intensive care. They were also more likely to be discharged directly to home. However, TAVI patients had a higher rate of vascular complications, a higher rate of aortic regurgitation (blood leakage through the valve) after the procedure and were more likely to need a pacemaker fitted.

“The results from our trial are encouraging,” said Professor Toff. “but it’s essential that we continue to follow the patients in the longer term to ensure that the clinical benefits are sustained and that no late differences between the groups emerge.” The researchers plan to continue to track outcomes for a minimum of five years.

“In the meantime, treatment recommendations should continue to be made by a multi-disciplinary heart team. Patients need to be fully informed about the alternative treatment options and their advantages and disadvantages. We need to know more about the long-term implications of the increased risk of aortic regurgitation after TAVI and to confirm the long-term durability of the TAVI valves.”

The results of the UK TAVI Trial were presented in the virtual Annual Scientific Sessions of the American College of Cardiology, combined with the World Congress of Cardiology, earlier this week. The meeting had been scheduled to take place in Chicago but was adapted to a virtual online meeting due to the COVID-19 crisis. The trial was funded by the NIHR Health Technology Assessment Programme and supported by the NIHR Leicester Biomedical Research Centre.