A nurse researcher who was the lead author of a paper into the risk factors of heart failure has learnt that the paper has been named ‘2020 Paper of the Year’ by the prestigious journal, Circulation: Heart Failure.

Dr Claire Lawson, an Advanced National Institute for Health Research (NIHR) Fellow and Lecturer at the University of Leicester, received the news from the journal’s editor in chief at the Heart Failure Society of America’s Annual Scientific Meeting on 6 October 2020. 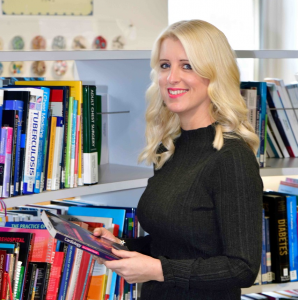 Dr Claire Lawson: “It’s an honour to have our paper selected as 2020 Paper of the Year. My thanks go to my co-authors for their work to bring this paper to fruition.”

The paper, titled ‘Risk Factors for Heart Failure: 20-Year Population-Based Trends by Sex, Socioeconomic Status and Ethnicity’ looked at over 100,000 anonymised patient records and the Index of Multiple Deprivation.

The researchers found significant differences in the onset of heart failure between groups within the patient population. For example heart failure appears to be happening at a much younger age for those from the lowest socioeconomic groups compared to more affluent parts of society – and that gap is widening. People from South Asian and Black backgrounds experience heart failure at a younger age compared to white Europeans.

The most common cause of heart failure is ischaemic heart disease (IHD). However, since 2006, women with heart failure are presenting with less IHD than their male counterparts. Instead their heart failure tends to be linked more with other risk factors, such as type 2 diabetes and high blood pressure. This suggests that clinicians should be looking out for non-heart-related conditions when considering which women may go on to have heart failure.

Sharing the news of Twitter, Dr Nancy Sweitzer, Editor-in-chief of Circulation: Heart Failure said the paper was an “important look at unmet needs” and that heart failure differences “in women and men and [other] huge disparities need attention.”

Dr Lawson said: “It’s an honour to have our paper selected as 2020 Paper of the Year. My thanks go to my co-authors for their work to bring this paper to fruition.”

She added: “Data modelling predicts that rates of heart failure are set to keep rising with our ageing population, so more people will seek care. Heart failure prevention programmes will need to target the groups most affected, as shown in our research, if we are to bring the disease under control in the coming years and prevent more people from developing heart failure.”

Professor Melanie Davies, Director of the National Institute for Health Research (NIHR) Leicester Biomedical Research Centre (BRC), who supported the study, said: “It’s exciting to see that our BRC is able to support important work from academics such as Dr Claire Lawson who is a real rising star in this field”.

Antonella Ghezzi, head of research nursing and midwifery at Leicester’s Hospitals, said: “Claire is an outstanding example of how clinical practice can be influenced by nurses in a positive way. It shows the importance of multi-professional working. Claire’s success is a reflection of her dedication to the nursing profession, ultimately supporting the wider health care system.”

Professor Umesh Kadam, professor of primary care and public health research at the University of Leicester and a senior author on the paper, said: “This study continues to also highlight the inequalities in relation to deprivation and ethnicity, for a major non-communicable disease such as heart failure; factors which have been further emphasised with the current pandemic. It will require multi-disciplinary initiatives, such as this terrific nurse-led project, combined with essential public health policy changes to meet this challenge of addressing inequalities.”

The research was funded by the Wellcome Trust and supported by the NIHR Leicester Biomedical Research Centre – a partnership between Leicester’s Hospitals, the University of Leicester and Loughborough University.

The full paper can be accessed here.