Professor Sir Nilesh Samani, Professor of Cardiology at the University and Honorary Consultant Cardiologist at Glenfield has been awarded the Mackenzie Medal of the British Cardiovascular Society (BCS).

The award, announced in June, is the highest honour bestowed by the BCS and it is in recognition of the recipient’s outstanding contribution to cardiovascular medicine and research in the UK. 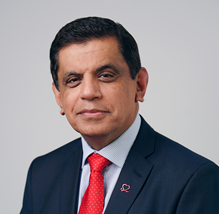 Professor Samani has worked in the field of cardiovascular research for over 30 years, authoring over 600 papers. He has held positions as the Head of the Department of Cardiovascular Sciences at the University of Leicester (2003-2016), Director of the Leicester National Institute for Health Research (NIHR) Biomedical Research Unit in Cardiovascular Disease (2009-2016), and Cardiovascular theme lead at the Leicester NIHR Biomedical Research Centre (2017-2020). He was appointed a Deputy Lieutenant of Leicestershire in 2010 and was knighted in the 2015 New Year Honours List for services to medicine and medical research.  Professor Samani is currently the Medical Director at the British Heart Foundation.

Professor Samani’s main focus throughout his career has been in discovering and understanding the link between genetics and common cardiovascular diseases such as high blood pressure, coronary artery disease and heart attack. His discoveries in this field have potential implications for future targeted treatments for these conditions, as well as an improved ability to identify those at risk and prevent the conditions in the first place.

Professor Samani’s team was the first to identify a causal link between telomere length and a coronary artery disease. Telomeres are caps on the end of chromosomes, which protect them from damage. Telomeres shorten as a part of aging, however their initial length and extent of shortening is highly heritable. This work has highlighted telomeres as possible treatment targets for a range of age-related diseases and sparked global interest.

Upon receiving the award, Professor Samani said: “This honour is a recognition, not only of me, but all my colleagues in Leicester both in the hospital and University that has made Leicester a centre of excellence in cardiology. I wanted to take this opportunity to thank all of them.”