A new study conducted by researchers in Leicester and Nottingham has shown the potential for a new blood test to not only diagnose human tuberculosis (TB) but also identify those at most risk of developing the disease, according to findings published in medical journal Clinical Infectious Diseases.

Despite recent reductions, England still has one of the highest rates of TB in Western Europe. While TB cases have been declining overall in the UK, the rate of TB in some of the most deprived areas remains more than seven times higher than in the least deprived. TB is a serious bacterial infection, which can be life threatening if not properly treated with antibiotics. Pulmonary TB of the lungs or throat is contagious although TB can affect any part of the body. 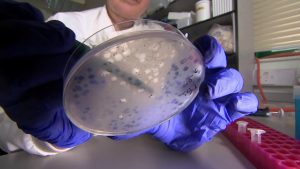 The research, carried out at the National Institute for Health Research (NIHR) Leicester Biomedical Research Centre (BRC) and the University of Nottingham’s School of Biosciences, used new blood test called Actiphage to look for the presence of the bacteria that cause TB (Mycobacterium tuberculosis; MTB). The study involved 66 participants in four groups: those with active pulmonary TB, those with latent TB, a control group of patients referred for suspected TB but found not to have the disease, and a control group of healthy individuals.

The new blood test was used to test all of the patients twice, 12 months apart. Actiphage tested positive in 73 per cent of people that we subsequently diagnosed with TB – for an experimental study this was a much higher level than expected. None of the participants in the control groups tested positive with Actiphage and none of the patients with latent TB who tested negative with Actiphage went on to develop active TB.

Intriguingly, two of the three participants with latent TB infection who tested positive with Actiphage went on to develop the disease more than six months later, suggesting the test may have a predictive role in identifying people with the infection at risk of developing the disease.

Senior author of the paper, Dr Pranabashis Haldar, Clinical Senior Lecturer at the University of Leicester and Consultant in Respiratory Medicine at Leicester’s Hospitals, said:

“TB is the leading cause of death from an infectious disease. It most commonly affects the lungs and from this site is transmitted to others by coughing and sneezing. As there is a lack of diagnostic tools for people unable to bring up sputum, diagnosis is delayed, increasing the likelihood that the disease is spread.”

Around a quarter of the world’s population carry the infection. In the vast majority, this is in the form of latent TB, which does not affect their health, but carries a risk of progressing to the active form of TB in around ten per cent of those infected. The mechanism for this is poorly understood.

Dr Haldar continued: “Our observations provide new insights into how human TB develops and support recent evidence of the existence of a transitional state of TB infection called incipient TB that does not produce symptoms but carries a high risk of progressing to active TB. There is potential for Actiphage to be developed, both as a mainstream blood test to diagnose TB and as a test used in screening programmes to help us identify and treat people with latent infection.

“As a blood test it is particularly suitable for patients unable to produce sputum, including children, and may help support diagnosis in underserved groups that struggle to access freely available healthcare resources.”

The new Actiphage test has been developed by the University of Nottingham in conjunction with the UK’s Royal Veterinary College and commercialised by PBD Biotech for major diseases in livestock, primarily as a blood or milk test for bovine TB and Johne’s disease. This is the first time the blood test has been trialled in humans.

Unlike many common bacterial infections, detection of the bacteria that cause TB is limited by the fact that Mycobacterium tuberculosis (MTB) is very slow growing, making traditional culture methods inefficient. More rapid molecular tests that detect MTB DNA are limited due to its tough cell wall that makes DNA extraction difficult. The new test uses a specific bacteriophage that infects live MTB and breaks open the cells to release DNA. The whole testing process can be completed in as little 6 hours.

“Actiphage is a novel blood test for mycobacteria that was developed to identify mycobacterial infections in farmed animals, helping farmers to control these difficult diseases.

“The data from our initial study in humans suggest that following infection, MTB is circulating in the blood at levels that were previously undetectable, and that the immune system may be failing to effectively contain the bacteria within the lungs.

“While we are cautious about generalising from a small sample size, we are optimistic that these initial findings indicate that Actiphage can be used as a tool to help us better understand the dynamics of the infection in humans.

“The new Actiphage blood test offers the potential to target those at risk of TB and allow treatment to start early. This is a very exciting development that invites further study.”