Pupils from Hazel Community Primary School in Leicester had the opportunity to ‘think and act like scientists’ in Research Space at Leicester’s Hospitals to celebrate International Clinical Trials Day on 23 May. 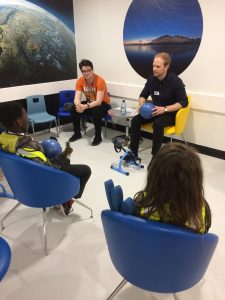 Normally Research Space is closed to visitors while clinical trials are taking place. However, in a break from the norm, 60 children from Year 4 took part in scientific experiments and had a tour of the facilities. Activities included using red cabbage indicator to test different household substances to see if they were acidic or alkaline, and learning through trial and error by building towers using only marshmallows and dry spaghetti.

Christina Daines, children’s research manager at Leicester’s Hospitals, said: “The aim of this event is to inspire the next generation of scientists, doctors and research nurses. The National Curriculum encourages children to ‘think scientifically’ so all our activities today were based around real life research techniques such as problem-solving, trial and error, using observational skills and recording results. After each activity the children collected a sticker to add to their Research Passport.

We also gave the children the opportunity to try out our latest virtual reality headset, sensory room and 3D distraction unit, which we use during clinical trials to take patients’ minds off uncomfortable procedures.”

Jack Sargeant, research associate at the NIHR Leicester Biomedical Centre, said:” Having the children visit on International Clinical Trials Day was great! They’d clearly learnt about clinical trials in class and remembered lots about James Lind and his famous scurvy experiment – they taught me a few new things as well! It was also great to talk to them about some of our lifestyle research and they seemed to really enjoy having a go at the activities from our ‘cab workout’ used in the ongoing SHIFT study.”

Mrs Westwood, science lead at Hazel Community Primary School, said: “Thank you to the Research Space staff for having our children here today to be real scientists and to have hands-on experience. The children have enjoyed it so much and will be talking about it for weeks to come, I’m sure.”

One nine-year-old pupil from the school said: “I enjoyed building a tower with marshmallows and spaghetti, but my favourite bit was in the Jupiter room because we got to see how a trial works using polo mints and we tested how well we use our left and right hands. I loved meeting all the different people who took us around the Royal and told us about their jobs.”

Another pupil simply added: “It was awesome!”

Research Space is a dedicated clinical trials facility based at Leicester Royal Infirmary. It is split into separate clinical areas for adults and children. The children’s facility, which was launched last year, is a bright and welcoming space-themed environment to help children and young people involved in research feel calm and relaxed. The facility was funded by Leicester Hospitals Charity, HSBC and through donations by trusts and members of the public.

International Clinical Trials (ICT) Day is an annual event held on or close to 20 May. The date was chosen in recognition of James Lind, a naval surgeon who conducted the first recorded clinical trial on 20 May 1747.

Members of Lind’s crew were suffering from scurvy, which is a disease that causes swollen, bleeding gums and previously healed wounds to open. Lind created a trial where he divided the sailors into different groups and gave them specific items to eat and drink.

The group that had been given oranges and lemons had practically recovered in just five days, leading to his theory that citrus fruit cured the disease. Later discoveries of vitamin C confirmed this was the chemical in citrus fruit that cured the illness.