15 years ago on 30 January Consultant Cardiologist, Professor Jan Kovac, performed the first Transcatheter Aortic Valve Implantation (TAVI) procedure in the UK, one of the first globally. Since then the use of the TAVI procedure can only be described as revolutionary. 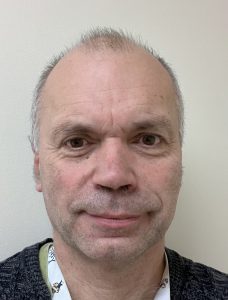 TAVI is used to treat patients with severe aortic stenosis, a narrowing of the aortic valve. In this procedure, a new valve is threaded through a small tube inserted into an artery in the groin, upper arm or chest.

It is now performed almost globally, with millions of patients undergoing the procedure annually. It is a first choice intervention because it is safe, has fewer risks that open-heart surgery, and is quicker and therefore easier for patients to make a speedy recovery. More recent research from Leicester has shown that TAVI works as well as open-heart surgery.

When he helped design the device and performed his first TAVI procedure, Professor Kovac could only hope for that level of success. For the anniversary, and as February marks Heart Month, Professor Kovac reflects on the story of TAVI.

“There was a group of us, medics, researchers and engineers, from all over the world. Even working as a multidisciplinary team was relatively rare then, it’s much more common now, which is great progress.

“The procedure received worldwide attention on day one. In a way I’m grateful, as it spread awareness for this new treatment very quickly, but it was also a lot of pressure.

“As we continued developing the technology, we were able to do the procedure under local anaesthetic and at faster speeds. This improved recovery times, which is so important for these patients who are often elderly and more vulnerable.

“We’re still researching just how impactful this procedure can be. In Leicester a team is investigating further if aortic valve intervention will improve the lives of people with aortic stenosis even before they experience symptoms of the condition.

“We can see how important TAVI is for healthcare currently. Recent research has shown the high numbers of aortic stenosis occurring in the country. Without TAVI, or those who are not eligible for open-heart surgery or are diagnosed late, mortality is 50 percent at 12-18 months if left untreated. With TAVI, life expectancy returns to almost normal.”

“I’m both proud and grateful to have been in the right time and place for a device to revolutionise cardiac care to the extent TAVI has done. I look at the field of cardiovascular care now, and I think we’re very good at fixing things when they go wrong. I don’t think another device or procedure will cause quite the change that TAVI did.

“Instead I think the next revolution will come from a new medicine or genetic research. I suspect it will be something that helps prevent disease or the need for interventions in the first place.”

The differences in COVID-19 infection risk between ethnic minority healthcare workers and their White colleagues is likely due to home and work factors rather than biology, according to the largest and most detailed study on the subject, led by the University of Leicester, University College London and University of Nottingham.